Kelly Preston Comedy-Drama ‘Off the Rails’ Sold to Screen Media 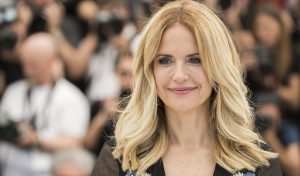 Screen Media plans to release the film in theaters and on demand in the first half of 2021. “Off the Rails” is one of the final roles for Preston, who died in July at the age of 57 after battling breast cancer. Metro International is handling foreign sales at the online American Film Market, which launches Monday.

“Off the Rails” is Jules Williamson’s feature directorial debut, inspired by Williamson’s own real-life events. Three friends, now in their 50s, recreate an interrail journey from their youth across Europe to fulfill the dying wish of their close friend — whose place is taken by her 18-year-old daughter. With lost passports, train strikes and romantic entanglements thrown their way, they must put old feuds aside to complete the journey within five days and remind themselves that age is only a number.

“Off The Rails” is a Bill Kenwright Films production in association with Black Camel Pictures and Palma Pictures, written by Jordan Waller and produced by Bill Kenwright.

“I’m thrilled that Screen Media has come on board ‘Off The Rails,’ with all their boundless energy and enthusiasm,” Kenwright said. “I loved the story of these three friends who have lost their way from the moment I was pitched it. (I was brought up on ‘Rio Bravo!’) Our commitment to it has only deepened since we lost our beloved Kelly. It’s about women reclaiming their true selves – and celebrates friendship, love, joy and freedom – a welcome antidote after a difficult 2020.”

Screen Media said, “We are so excited to be bringing a movie about fun, tradition, and love to audiences at a time when we can all use a little more of each of those. We know audiences will love seeing these incredible actresses tell this story. Tragically, Kelly Preston’s passing makes this film’s message of friendship especially poignant, but we are so proud to be able to present ‘Off the Rails’ and Kelly’s performance in it.”