EXCLUSIVE: Agatha Christie is finally headed back to the big screen.

Christina Hendricks, Gillian Anderson, Stefanie Martini, Terence Stamp and Honor Kneafsey are joining Max Irons and Glenn Close to star in an upcoming adaptation of Christie’s whodunit Crooked House, which has started shooting in and around London.

Crooked House, one of the few of Christie’s books that hasn’t been adapted for the screen until now, has been in development for a while and been a major passion project for Abrams, Wood and Spring, who have steered the project to realization. The story follows private detective Charles Hayward who is invited to solve a gruesome crime where nobody is above suspicion, including Sophia, his client and former lover.

“Some years back we went through really everything that was available in terms of Agatha Christie and this book really jumped out for a number of reasons,” Abrams told Deadline. “It’s a stand-alone – so it’s not a Marple or Poirot mystery – and there is a freshness to it. It won’t necessarily go with a familiar pattern. It’s driven by a young detective and an even younger ingénue who he’s had a past with and who’s either a suspect or the next victim. That’s what’s driving it.” 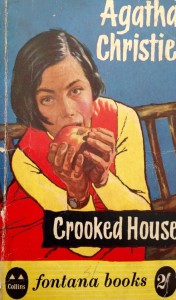